A good UAS pilot needs to know his camera settings given specific conditions to produce optimal imagery for mapping applications. 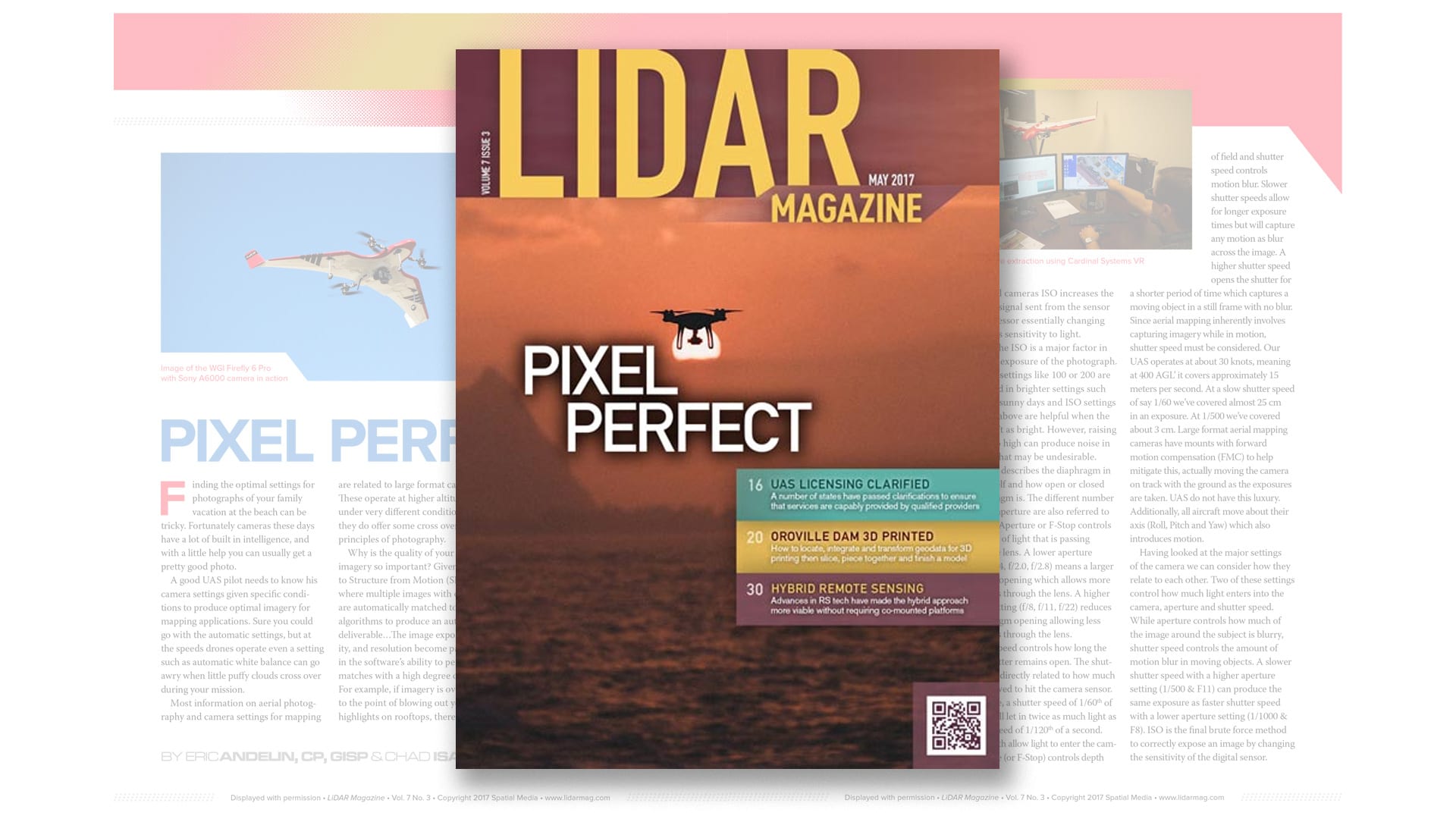 This article appeared in the May 2017 issue of LIDAR Magazine. Click here to view the issue online.

Finding the optimal settings for photographs of your family vacation at the beach can be tricky. Fortunately cameras these days have a lot of built-in intelligence, and with a little help, you can usually get a pretty good photo.

A good UAS pilot needs to know his camera settings given specific conditions to produce optimal imagery for mapping applications. Sure you could go with the automatic settings, but at the speeds, drones operate even a setting such as automatic highlight balance can go awry when little puffy clouds cross over during your mission.

Most information on aerial photography and camera settings for mapping are related to large format cameras. These operate at higher altitudes and under very different conditions, but they do offer some crossover in basic principles of photography.

Why is this the quality of your aerial imagery so important? Given the shift to Structure from Motion (SFM) where multiple images with overlap are automatically matched together via algorithms to produce an automated deliverable…The image exposure, quality, and resolution become paramount in the software’s ability to perform these matches with a high degree of accuracy. For example, if imagery is overexposed to the point of blowing out your highlights on rooftops, there is nothing for the software to match and as a result, you’ll either get no data or bad data. Conversely the same is true of areas that appear too dark, such as roads. If you’re doing conventional photogrammetry with stereo models that crispness in the image really allows you to “find ground” if the imagery is blurry that ground you seek becomes “soft” meaning difficult to interpret. In this example, the image is overexposed and also shows has image blur from a shutter speed that was to slow.

The UAS pilot needs to understand not only his aircraft but his camera, lens, and the lighting conditions in order to produce the best images possible. A typical mission with our UAS will cover 400 acres and take about 40 minutes of flying time. In that 40 minutes, we’ll capture up to 800 exposures. Optimal conditions would be sunny, calm, and cloud free. Unfortunately, we do not always have this luxury.

Good mission planning includes diligent review of the local weather conditions. If there will be clouds in the area, check their direction of travel and wait for breaks in the conditions that might allow you to complete a mission. Scrubbing cloud shadows from 100’s of exposures is not very fun or practical, and it will likely consume your budget. Knowing you have the correct settings from prior testing and experience will save you a lot of time in the field and minimize the possibility of re-flight due to poorly collected imagery.

Beginning with the basics, the 3 most important settings in any camera are ISO, Aperture, and Shutter Speed. When set correctly these all work together to create a photograph with optimal color, detail, and exposure. ISO stands for International Standards Organization, and is a standardized industry scale measuring sensitivity to light. If you remember film, it was sold in different ISO values used to show how sensitive the film was to light. With digital cameras ISO increases the gain of the signal sent from the sensor to the processor sensor can be adjusted, without changing any hardware to be more or less sensitive to light. Adjusting the ISO is a major factor in controlling exposure of the photograph. Lower ISO settings like 100 or 200 are usually used in brighter settings such as outdoor sunny days and ISO settings of 400 and above are helpful when the lighting isn’t as bright. Raising the ISO too high can produce noise in the image that may be undesirable.

While both allow light to enter the camera, aperture (or F-Stop) controls depth of field and shutter speed controls motion blur. Slower shutter speeds allow for longer exposure times but will capture any motion as blur across the image. A higher shutter speed opens the shutter for a shorter period of time which captures a moving object in a still frame with no blur. Since aerial mapping inherently involves capturing imagery while in motion, shutter speed must be considered. Our UAS operates at about 30 knots, meaning at 400 AGL’ it covers approximately 15 meters per second. At a slow shutter speed of say 1/60 we’ve covered almost 25 cm in an exposure. At 1/500 we’ve covered about 3 cm. Large format aerial mapping cameras have mounts with forward motion compensation (FMC) to help mitigate this, actually moving the camera on track with the ground as the exposures are taken. UAS do not have this luxury. Additionally, all aircraft move about their axis (Roll, Pitch and Yaw) which also introduces motion.

Having looked at the major settings of the camera we can consider how they relate to each other. Two of these settings control how much light enters into the camera, aperture and shutter speed. While aperture controls how much of the image around the subject is blurry, shutter speed controls the amount of motion blur in moving objects. A slower shutter speed with a higher aperture setting (1/500 & F11) can produce the same exposure as faster shutter speed with a lower aperture setting (1/1000 & F8). ISO is the final brute force method to correctly expose an image by changing the sensitivity of the digital sensor.

To determine the right combination of settings for your aerial photography missions, get out and do some testing. In our case, we developed a matrix with a combinations of ISO, aperture, and shutter speed settings then tested them. Our UAS as well as many others can run the same mission, hitting the same exposure points as many times as we need. All we had to do was land, change the camera settings and send it back up. Our FireFly Pro 6 is VTOL and needs no runway or large open area to launch or land, so it always returned within a few feet of its launch point. This allowed us to minimize time launching and retrieving the UAS, and maximize time flying or in this testing our payload.

Our UAS team is based in Tampa, Florida and we operate quite a bit in Florida where we have lots of sunshine. So for this round of testing we had perfect sunny conditions throughout the day. We ran multiple short flights along the same path to capture a small number of exposures over the same ground with varying camera settings.

Figure 1 shows examples of the exposures collected that day.

Once the extremes were eliminated we then began looking at the quality (or clarity) of the exposures (Figure 2). Outside of focus, the only other factor that would cause blurring is the vibration from the UAS. Assuming these are both mitigated as best as possible we started investigating the shutter speed and aperture settings as they relate to the image quality. Note the order of the images in this example is the same as the order of the example in Figure 1.

In general, the images with an ISO of 200 and a Shutter Speed of 1/800 seem to have better image quality/less blur. Note the ability to see the cracks in the paint stripes. For our use, with our camera (Sony A6000), given sunny conditions looking at both the full image example and the corresponding examples above, we would probably use the center left (ISO-200 f 8 1/800) or center image (ISO-200 f10 1/800).

The examples in this article were captured under excellent conditions and can be used as a baseline. As stated before many cameras do have automated modes that will hold constant the ISO setting for example and allow aperture and shutter speed to change with lighting conditions. You can even hold or limit two variable such as ISO and Aperture with some cameras. So if you’re flying where changing conditions might be present consider letting the camera do some of the work. There are countless forums online where you can learn about specific cameras and their settings from forum members. Spend some time checking them out and run some tests.

Of course ultimately camera settings are a preference determined by the user of the data and its purpose. Fortunately, we now live in a digital world where color balancing and other slight adjustments to imagery can be done with relative ease as long as what you start with is close to where you want to end up.