See how WGI’s engineers and designers are using the latest tools and technology to improve our infrastructure.

Three-dimensional (3D) modeling is far from a recent development in the engineering field. As a 2012 college graduate, I recall several professors stressing the importance of this rapidly developing component of the standard two-dimensional (2D) drafting perspective. At the time, I was enrolled in a Construction Management course and utilizing a type of modeling called Building Information Modeling (BIM). In my course, BIM helped to discover and resolve conflicts for vertical construction such as a mechanical engineer’s HVAC layout interfering with an electrical engineer’s lighting design. Although I never pursued a career in vertical construction, the message was clear; adding the third-dimensional aspect provided the most realistic digital view possible, thus identifying and eliminating potential conflicts.

At WGI, I model transportation projects in 3D using Bentley’s Microstation Corridor Modeling tools from small-scale county intersections to large-scale interstate highway interchanges. After the preliminary horizontal geometry and design are established, our design engineer can proceed to the modeling phase. The design engineer establishes the appropriate rules, and then models are created using templates for various segments of the project. Templates can be as simple or as complex as needed. For example, a template for a two-lane rural road would contain each lane of the road at a given slope, as well as the surrounding features such as a curb, gutter, or a drainage ditch.  A more-involved template may contain a dozen lanes at varying slopes with complex features such as superelevation, retaining walls dependent on road height, or lanes converging/diverging. Complex templates contain several “trigger lines” or parts of the template that vary depending on the design (e.g., switching between guardrail or barrier wall along a road). Well-organized templates allow the design engineer to reuse templates for multiple projects and adjust them as the original design changes in lieu of creating a new one. Similar to BIM, Corridor Modeling allows WGI to recognize and resolve potential conflicts early in the design phase, such as vertical clearance under bridges and areas where roads merge or split. The finished product creates a functional 3D model for the engineer or client to inspect all facets of the project.

WGI has taken a step past 3D modeling using rendering software and virtual reality. LumenRT is a rendering software by Bentley, compatible with Microstation, that visualizes projects in a photorealistic environment. Although the design file cannot be changed (e.g., add or subtract lanes or ancillary features of the roadway), LumenRT offers the ability to make graphical changes and add elements to mimic the surrounding area of the project. LumenRT contains extensive libraries of vehicles, pedestrians, flora/fauna, and miscellaneous objects suitable for a variety of engineering projects. Engineers can change the environment to emulate the existing terrestrial features including grass, water, and elevation, even simulating different hours of the day. Users can alter surfaces to create realistic roadways or highlight potential conflict areas (e.g., translucent shapes under bridges to verify vertical clearance requirements).

The most important advantage of using LumenRT is the ability to create high-quality in-house graphics. Engineering staff can pinpoint exactly what we want to show and produce graphics ourselves, eliminating the need for third-party contractors. Not only is this a huge cost saving, it also gives the project manager more flexibility to highlight portions of the project that he or she believes could influence WGI’s potential to win a pursuit. LumenRT users can take screenshots and videos anywhere within the software environment by flying around to various locations. The videos can be viewed with a Samsung Gear VR headset, giving clients a real perspective of the project by seeing it in an immersive setting.

Additional programs, such as Context Capture, allow for more accurate depictions of the surrounding features a project manager may want to distinguish. Context Capture uses photogrammetry to take real-time images and convert them into a 3D model. The model can be brought into Microstation to estimate distances and visualize present-day conflicts. Compatible with LumenRT, these models serve as an enhanced 3D graphic to bring another level of realism to transportation projects.

Integrating Corridor Modeling, LumenRT, and other advanced software programs into traditional roadway projects has provided WGI a chance to stand out amongst the competition and deliver exceptional projects to clients. As the industry moves toward requiring 3D models, WGI will be well-versed in both marketing and designing projects using a wide variety of engineering software. The result will be a smoother design process, and fewer construction problems, meeting the transportation needs of our citizens. 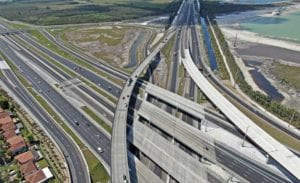 The $233-million I-75 Express Lanes Design-Build project created a 3.1-mile, four-lane tolled roadway within a 166-ft-wide median of Interstate 75. 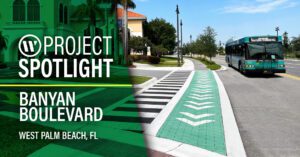 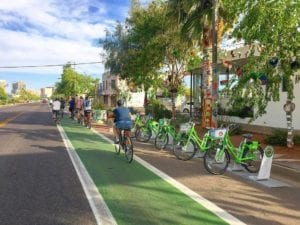 Municipalities throughout the region are focusing on the need to create transportation networks that do not solely prioritize the automobile. 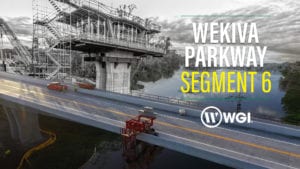 WGI’s Senior Vice President of Transportation, Nancy Clements, was on-site at the Wekiva Parkway Segment 6 Project to discuss the environmentally sensitive Wekiva River and all the unique features of the project. 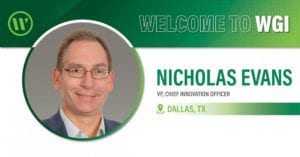 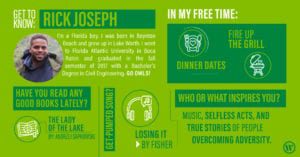