Between The Everglades And The Ocean: South Florida’s Taut Environmental Guidelines

Qualified engineers and scientists who are experts in all things land and water are essential to meeting demanding development standards and protecting not only the environment, but your project.

Between the Everglades and the Ocean: South Florida's Taut Environmental Guidelines

Whether it’s trees and vegetation, burrowing owls, stormwater management, contamination, or wetland mitigation, there’s plenty to consider when developing land in South Florida. Changing regulations, evolving standards, and the ongoing effort to reimagine or replace a development that’s already in the ground, present more than enough challenges for those looking to execute A-list projects.

In today’s market, developers need qualified scientists and seasoned engineers if they want to meet the encyclopedic array of guidelines at the local, state, and federal levels. A consultant working from a boilerplate checklist isn’t enough. Today’s development demands the services of professionals who are experts in all things land and water, the two resources that drive and inform many environmental regulations. 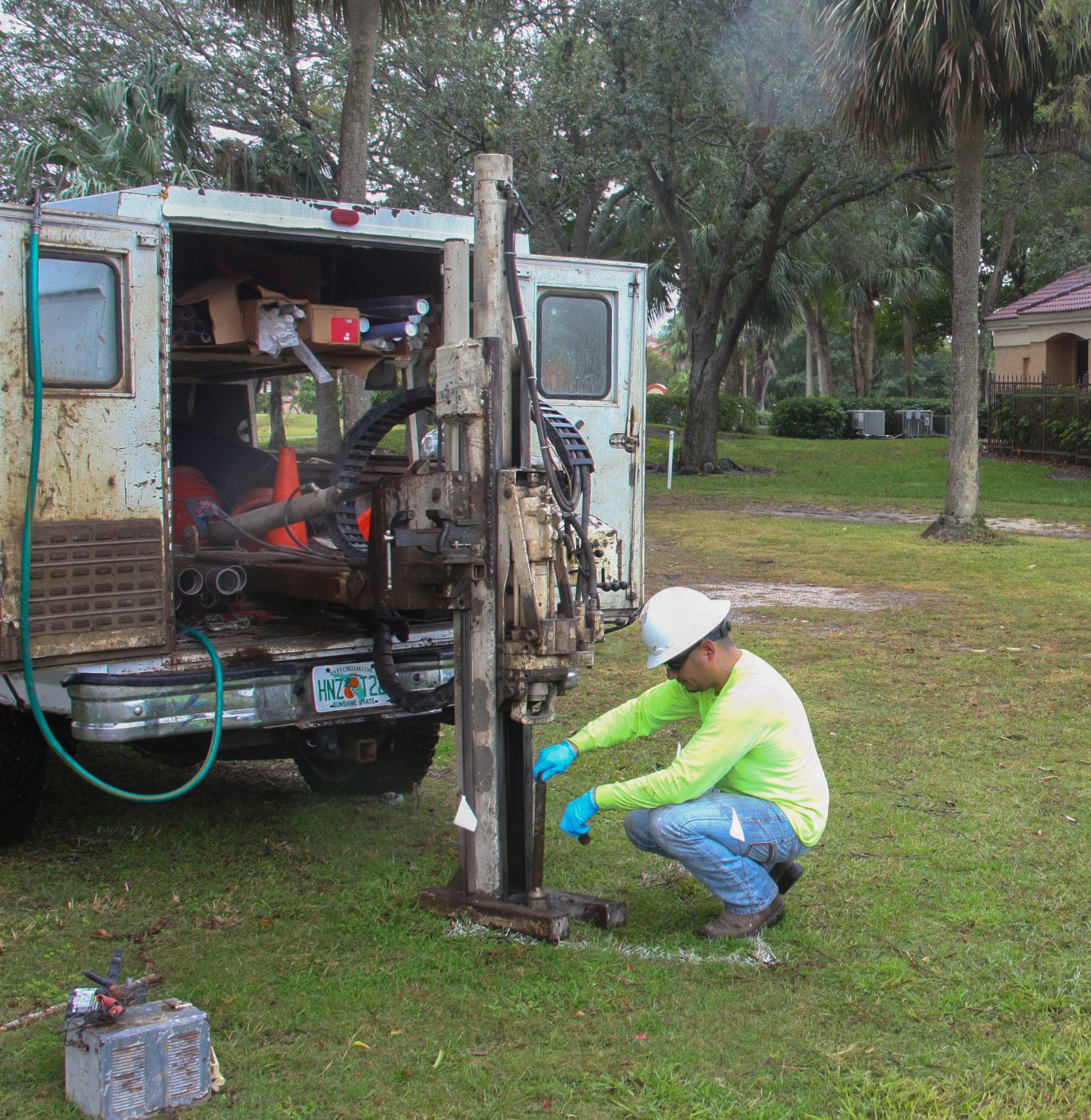 In a place as land-scarce as South Florida, developers are oftentimes looking at properties originally built-out in the ‘60s, ‘70s, and ‘80s. Greenfields are rare. The Atlantic Ocean is on one side and the Everglades on the other, so there really is nowhere to go. For those looking to develop a project, it’s likely going to be on property that’s already been used and, oftentimes, is conditionally closed by the Florida Department of Environmental Protection (FDEP). Conditionally closed sites are properties with residual soil or groundwater contamination that is generally impractical to completely remediate, so the cleanup process is closed, via land-use restrictions or engineering controls in perpetuity, to protect people from the lasting contamination.

Currently, FDEP is writing guidance for stormwater management systems on conditionally closed sites where additions or modifications are restricted as part of the closure. Yet the existing impervious areas and stormwater systems might need to be altered for future use, but cannot be modified if those changes push the site’s contamination to uncontaminated parts of the property, or if they push contamination offsite. For contaminated sites that have a Conditional Site Rehabilitation Completion Order (CSRCO), if stormwater modifications lead to the spread of contamination, then expensive remediation could be required.

With so much at stake, it is critical to have qualified scientists and engineers who understand how stormwater ponds, exfiltration trenches, irrigation wells, and dewatering may affect contaminant migration in the soil and aquifer. It’s not clear when the current guidance will be completed, but staff at WGI are already familiar with what’s in the draft, which way the guidance is headed, and what it means for stormwater management systems, CSRCOs, and redevelopments on conditionally closed properties.

Guidance for stormwater systems is not the only document under review. The American Society for Testing and Materials (ASTM) E 1527 standard for Phase I Environmental Site Assessments (ESA) is expecting an update next year. While the standard was first published in 1993, it is periodically revised to be up-to-date with the market. However, the last revision was in 2013. 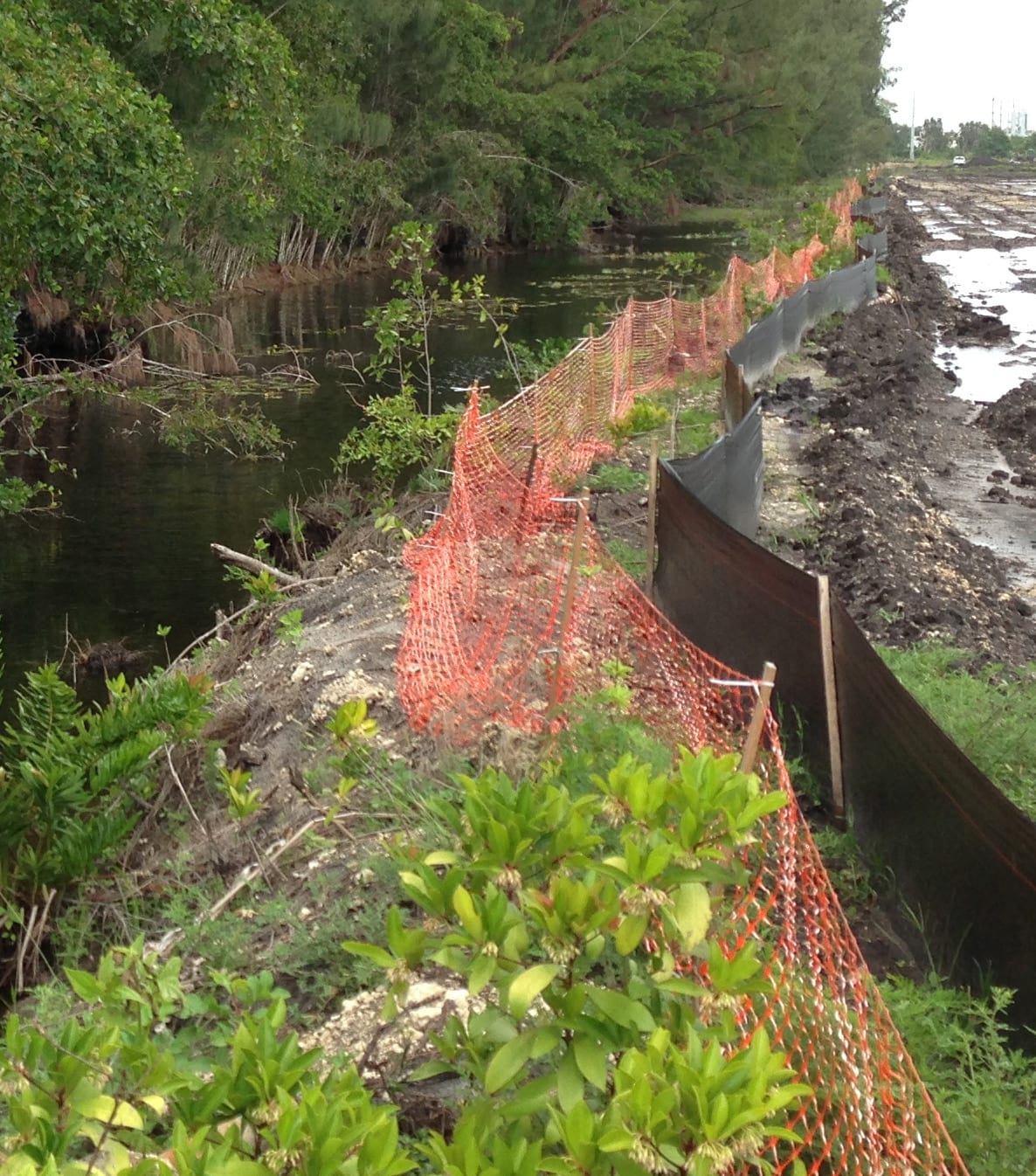 Among other things, the ASTM committee is providing guidance and more consistency defining what conditions meet the Recognized Environmental Condition (REC) designation, and what do not. Right now, different consultants have different interpretations of what meets the definition of an REC. Revisions for 2021 will require a more thorough and thoughtful analysis of historical uses and soil and groundwater conditions. WGI’s Phase I ESAs are already implemented in accordance with the upcoming revised standard.

A key element of a commercial real estate transaction, the Phase I ESA ensures environmental due diligence by the owner and/or the lender. If done well, they provide protection from contamination liability. A typical assessment includes examinations of soil, groundwater, and surface water quality. The assessment includes a site visit; reviews of federal, state, local, and Tribal records; historical records, drainage patterns, and topography; and the evaluation of neighboring properties.

As important as the Phase I assessment is, there are plenty of companies doing them fast and cheap, using generic language and analyses. While certainly tempting for a developer looking to save money, it’s not a good practice. Sloppy Phase I assessments oftentimes fail under scrutiny, identifying problems that aren’t really problems while also failing to identify actual crucial environmental issues requiring attention. Everyone loses — the consultant and the developer — when someone misses a problem. In the event a faulty Phase I ends up in court, an owner can lose its Innocent Landowner defense, and be on the hook for a costly remediation.

In addition to the Phase 1 ESA, many South Florida projects need wetland mitigation credits. Under the
US Army Corps of Engineers (USACE) 2008 Compensatory Mitigation Rule, wetland mitigation credits are required to satisfy federal mitigation requirements if there are unavoidable wetland impacts on a development. While federal credits are readily available, mandatory credits at the state level are in short supply. In Miami-Dade, Broward, and Palm Beach counties, they currently aren’t available at all except for specific situations. As a result, developers in those areas are conducting on-site mitigation, and that means big money for the restoration and/or creation, monitoring, and perpetual maintenance of a sensitive wetland system. It also limits the available space for development on a property.

Compounding this problem is that mitigation credits, except for those obtained for roadways and pipelines, must be used in the service area where purchased. A developer cannot buy credits from a mitigation bank in Hernando County and use them to offset damage to wetlands on a site in Miami-Dade.

The USACE describes a mitigation bank as, “a wetland, stream, or other aquatic resource area that has been restored, established, enhanced, or (in certain circumstances), preserved for the purpose of providing compensation for unavoidable impacts to aquatic resources permitted under Section 404 or a similar state or local wetland regulation.” But those mitigation banks must hit certain milestones before they can offer credits on the development market. In the case of the “Hole-in-the-Donut” mitigation bank, supporting a 6,300-acre wetland restoration on a former agricultural site in Everglades National Park, those credits — priced at $69,000 per credit — are not often available. The credits are released on an irregular schedule — typically only about once per year.

When the credits run out and on-site mitigation is the only option, developers may be forced to consider it. While on-site mitigation might be expensive and time consuming, it can be done well. And WGI, with experienced Professional Wetland Scientists on staff, understands how to restore, improve, monitor, and maintain wetlands. With an expertise in state and federal regulations, the firm knows which mitigation strategies the agencies will accept, how to minimize long-term maintenance costs, and how to maximize the site’s development potential.

The Florida burrowing owl is listed as state Threatened on Florida's Endangered and Threatened Species List and is protected under the Federal Migratory Bird Treaty Act. / Florida Fish and Wildlife Conservation Commission. 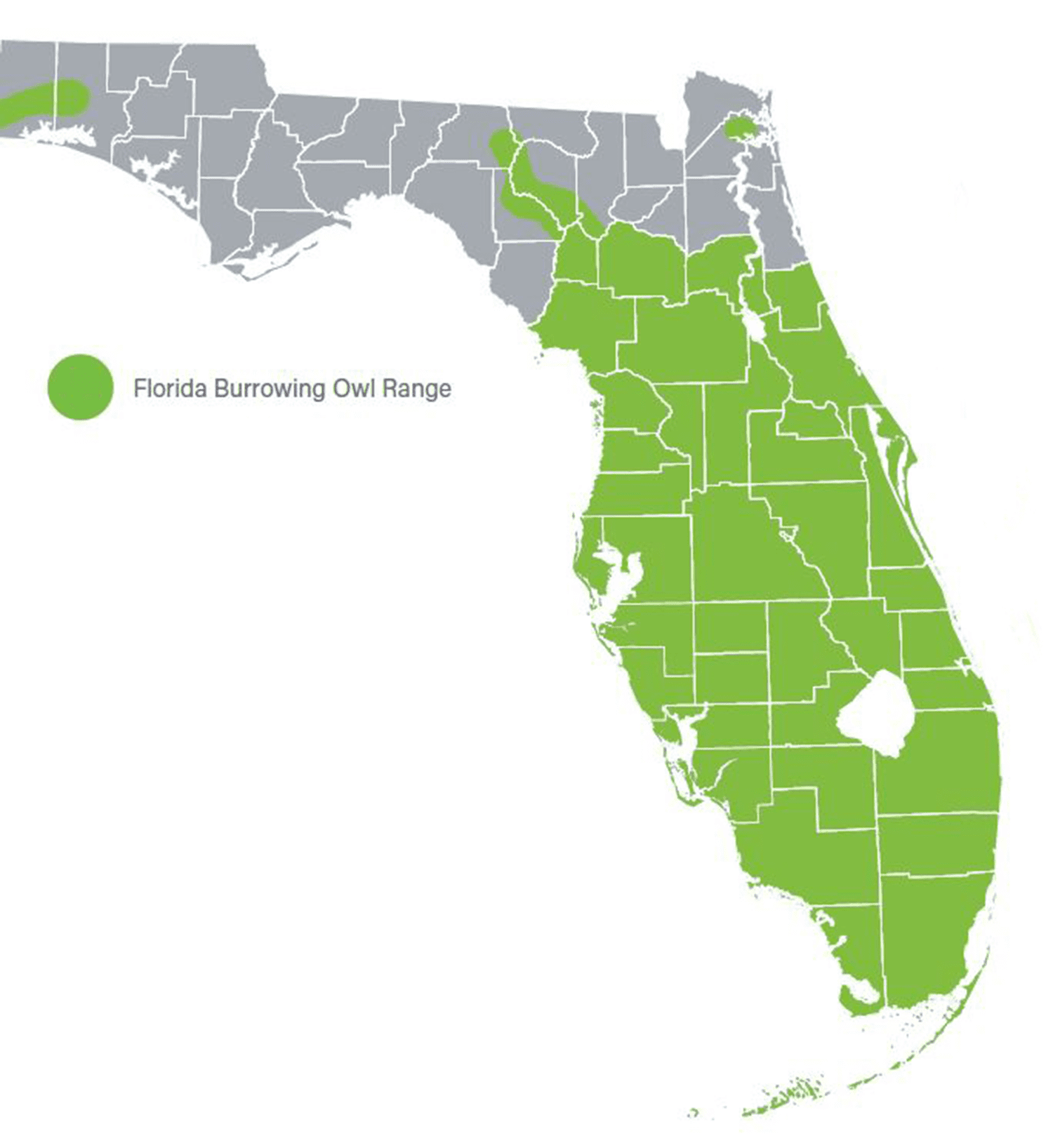 As the state of Florida’s population boomed over the last five decades, it should come as no surprise that native wildlife was harmed. One such species is the Florida Burrowing Owl, found on vacant lots, golf courses, pastures, and similar open grassy areas. The owls live in pairs or loose colonies, and their 39-county distribution covers the entire peninsula. The long-legged bird, standing about nine inches tall, uses burrows for breeding and sheltering. It is listed as state Threatened on Florida’s Endangered and Threatened Species List and protected under the Federal Migratory Bird Treaty Act. Loss of native habitat and lac of protected habitat are key reasons why burrowing owls are under threat.

of permits, mitigation options, and recommended conservation practices such as establishing preserve areas with starter burrows. A significant change to the guidelines is the addition of minimum qualifications for the biologist conducting video-scoping and relocating burrows. Previously, this work could be done by most biologists.

Under the new guidelines, the biologist must meet experience thresholds for surveying, using a burrow video-scope, and excavating burrows. WGI has qualified, state-registered biologists to solve any issues a developer has with burrowing owls.

As the state of Florida protects its birds, the cities and counties are protecting their trees. Many municipalities and most counties have their own ordinances when it comes to trees, and they often change. Keeping up with code changes can be tedious, but it’s a necessity. In South Florida, it’s rare that a development does not have to conform to some type of vegetation regulation. It’s a box that is always checked.

The familiar issues, of course, are with common invasive tree species — Brazilian pepper, Australian pine, and Melaleuca — and native trees like slash pine, laurel oak, live oak, and sabal palm that are typically protected. These trees, among others, are often protected by county and municipal ordinances across South Florida, and those ordinances cover everything from historic trees to relocation, from power lines to right-of-way, and from abuse to preservation. In many municipalities, tree regulations are so stringent that they increase the time and effort spent on site planning and feasibility,  an expense borne by the developer. But, it’s an unavoidable reality, so a realistic cost assessment on the front end is vital. Otherwise, a developer could be in for a serious case of sticker shock

Entire projects don’t get derailed over regulated trees. But non-compliance can result in Stop-Work Orders. And plans can dramatically change due to concerns over the location of trees, or the wish to showcase an aesthetically pleasing tree at a particular spot on a site. In these scenarios — and to stay abreast of what’s happening with local ordinances — WGI has Certified Arborists on staff to execute surveys, permits, and appraisals for trees

Environmental regulations at the local, state, and federal levels continue to evolve. They will not be going away. South Florida’s developers will always need engineers and scientists like those on staff at WGI, with the experience and expertise to not only protect the environment, but protect the project.

For more information about these topics or to have a conversation with one of our experts, please contact us:

Between the Everglades and the Ocean: South Florida's Taut Environmental Guidelines 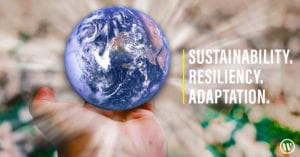 How WGI is working to ensure a healthy and viable environment by embracing sustainability, resiliency, and adaptation (SRA). 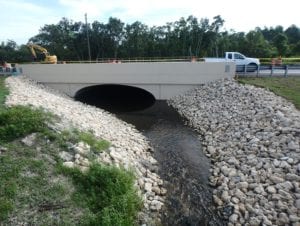 Collaboration across multiple divisions of WGI was needed to accomplish this small yet complex project. 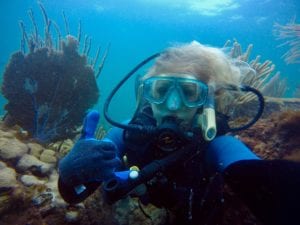 A Day in the Life of an Environmental Scientist

Take a walk (and dive 🤿) with Amanda Montgomery as she gives us a glimpse into what a day in the life of an Environmental Scientist looks like at WGI. 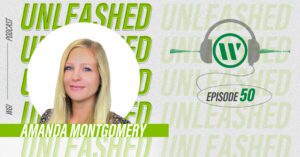 For this milestone episode of WGI Unleashed, we get to know Amanda Montgomery, Environmental Scientist for our Environmental Team based in our Fort Lauderdale, FL office. 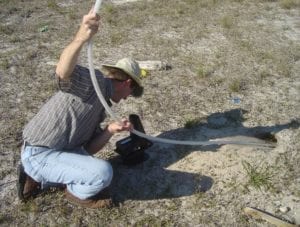 If you think you may have burrowing owls on your land, it’s important to have a qualified biologist on your team. WGI’s professionals meet the FWC qualifications to conduct video scoping and relocation of burrows.