The Ocean Reef Club Associates Village Parking Garage is a three-story garage for employees of Ocean Reef Club. This garage was a multi-disciplinary effort driven by our Parking and Structural team, with Architectural Design incorporations through intentional reveals in the pre-cast concrete spandrels and walls. The reveals cast into the panels add a human-scale to the large garage structure and draw the eye along the spandrels to the white prefabricated railing intersecting horizontality and verticality.

The Northwest Stair Tower is the best example of this effort because of its more accessible location than the other towers. Both the NW Tower and North elevation utilize color and texture variation to intentionally highlight the most accessible side of the garage. The stone texture was strategically placed to subtly highlight the NW Tower and its vertically. The tower became the cornerstone of the project, with stair landings extending past the elevator shaft wall. The final tower design was to ultimately focus the viewer’s perception on the human scale instead of the large scale of the elevator wall. 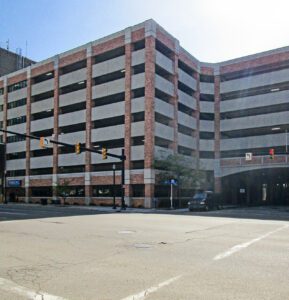 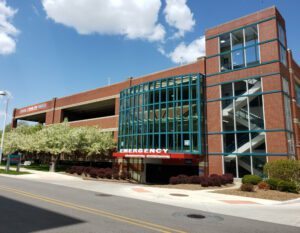 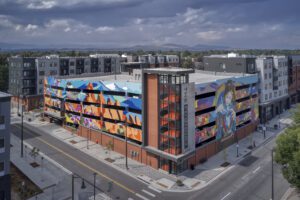 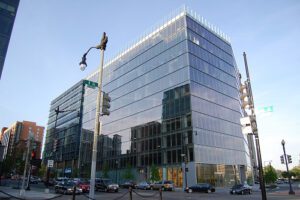